Almost a full month into the release of MLB the Show 2021, the 2nd Inning Program has dropped. There are some differences in the way programs are completed in ‘21 than years past. Let’s explore those, then go over the reward path that will allow you to obtain the bosses.

In recent years, programs were completed by earning stars. At a certain number of stars, you received rewards aper the number of stars you had. This year the reward path is a little different. In order to accrue the rewards, you just have to be playing the game and earning xp or experience points.

XP is rewarded playing any type of game mode, whether it is playing online in pvp ranked seasons, battle royale, or event games. Or, you can play offline modes, such as road to the show, franchise, or games against the computer. All of these different game modes result in obtaining xp needed to complete the program.

There are missions involved as well that give boosts to your xp. You can obtain 5,000 xp by winning 10 games in competitive online modes, scoring 21 runs with either Prospect, Rookie, or Breakout series players, or 10 stolen bases with any players in online game modes. There are also daily missions that change each day that gives a less significant amount of xp, but it is extra nonetheless.

Another significant xp boost is gained by completing the 2nd inning martian conquest map. Each program will feature a different conquest map based on the theme for that program. This current program has an outer space theme, hence the martian title. The conquest map features eight territories that must be captured. Once you have completed all of the goals, you will receive 25,000 xp for completing the map. 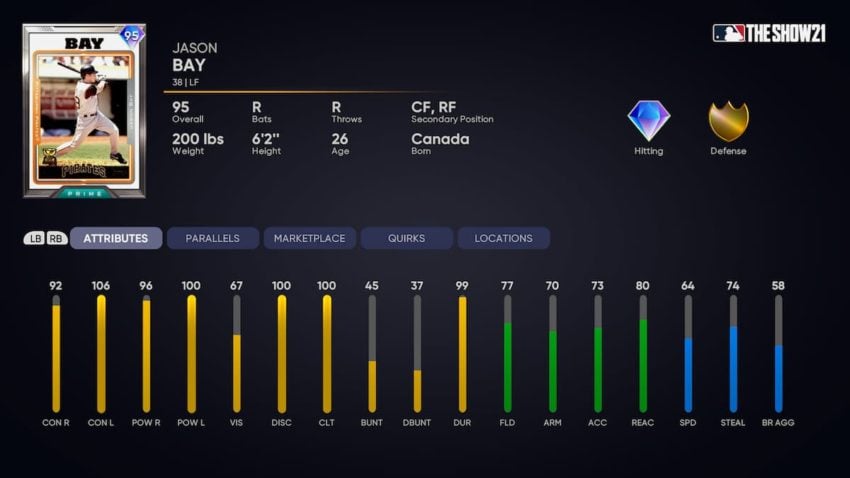 Let’s talk about the good stuff that is obtainable during this program. As you get to certain markers, there are all types of different rewards. Some involve just obtaining stubs or different pack variations. You can also obtain different unlockables to help with your created player attributes.

There are three main packs along this rewards track that are obtained at 100,000 xp, 175,000 xp, and 350,000 xp. At 100,000 xp you will receive a gold player choice pack. In this pack, you will get to pick between one of three players. The first option is an 84 Rookie Ryan Klesko. The left fielder has gold hitting and silver defense. While most competitive players will shy away from this card, if you are just starting out, this card has great hitting stats against right-handed pitching, 78 contact, and 98 power.

The next option is 84 All-Star Michael Young. This card has the main position of shortstop but can play both second base and third base as well. Featuring diamond hitting and common defense, this player is another guy who could be a potentially good budget bench bat. With superior contact from both the righties, 97, and lefties, 103, this card would make a great pinch hitter in a clutch spot.

The final option is 84 All-Star starting pitcher Catfish Hunter. This card features a four-pitch mix with 4seam fastball, slider, changeup, and curveball. The best feature with this card is the 116 stamina that he has, meaning his energy bar will stay filled for longer. His pitch velocity is not that great, with his fastball only reaching 90 mph. His slider will be his best pitch featuring 85 break.

Once you get to the 175,000 xp mark, these are the cards that will become potentially playable in competitive lineups. The first choice is 87 overall Future Stars third baseman, Austin Riley. This card is an absolute hitting machine. With contact for both being above 65, the main positive for this card is the power. From righties, Riley features 92 power, and from lefties, he features 95 power. His defense is not the best, with 76 fielding, he does have first base secondary, which 76 makes him completely usable there,

The next option is 87 overall Future Stars starting pitcher Michael Kopech. This card throws absolute gas and has a really nice five-pitch mix. Kopech’s pitch mix features both a four-seam and a two-seam fastball, a slider, a changeup, and a curveball. His four-seam fastball is at a max velocity of 99 mph, backed up with the outlier perk, which makes his fastball have the ability to reach 102 mph. The only real downside to this card is his control is less than stellar.

The final option is the 87 overall September 2019 player of the month left fielder Brad Miller. This is one of those cards that if you have played this game, you know that he plays way above his stats. One of the best features of this card is that he is able to play every position on the field except for the catcher. He bats lefty at the plate and has superior hitting stats against righties with 98 contact as well as 115 power. Against lefties, he is not as great but usable with 69 contact and 76 power.

Now we get to the program’s final bosses. This is where the three best cards of the program will be found. The first option is 95 overall closing pitcher Lee Smith. This is a new style of card featuring the accomplishment series, marking him as the 300 save club card. He features a four-pitch mix with 4seam fastball, slider, cutter, and forkball. Smith has max velocity on his fastball at 99 mph and features one of the best pitches in the game, the cutter, which he throws at 94 mph. The best features on this card are 101 h/9 and 122 k/9.

The next option is the 95 overall All-Star Don Mattingly. This card is a base-hitting machine, with 108 contact against righties and 113 contact against lefties. While his power numbers are not the best, 83 against righties and 50 against lefties, this guy will be great in the two-hole or at the bottom of your lineup when you need a big base hit. Another perk to this card is it can play all corner positions on the field and play them all at a high level. He is the only card in the game that throws left-handed and has the ability to play third base at diamond level fielding.

The final card in this group is the newest legend to the game, 95 overall prime series left fielder Jason Bay. In his first year in the game, Bay is rewarded with great hitting stats. He features 92 contact and 96 power against righties, as well as 106 contact and 100 power against lefties. One of the biggest issues with this card is he only has 77 fielding, 70 arm strength, and 64 speed. With the ability to play all three outfield spots, those stats limit him to really only being viable in left field. Looking at his overall statistics, this seems like Bay’s most potential will be seen as a bench bat.

All these rewards are given simply for playing the game. If you are contemplating picking up the game, these features are one of the best reasons to play. Unlike many games these days, there is no need to have to pay actual money to obtain a great roster. The gameplay has been great, and the content is always top-notch from San Diego Studios.

Excel will reportedly round out their 2023 roster with former Misfits player Vetheo. Read more about Vetheo’s move and other opportunities here.
[…]

NA VCT Stage 2 Challengers is well underway with the group stage coming to a conclusion. With Cloud9, Sentinels, The Guard, and TSM packing their bags, the eight remaining teams are set to duke it out when the playoffs start on June 16th. Read more about the group stage results and playoff seeding here.
[…]